Our last night at Bell Haven was christened under a fire lit sky.

We had some welcome visitors share their sailing stories on our boat. We first saw them docking their catamaran yacht at what I would have described as ramming speed. They had some amazing faith in their transmission, which stopped their boat just in time to avoid a dock crash. The two that stepped off were vetted sailors who were hired to transport a recently purchased yacht down the coast before the boat was to embark on a 55,000$ container ship trip to South Korea.

But all the drama that came along with it really put our quaint little inland pleasure cruise into perspective for us.  Upon their departure Adam and I looked at each other somewhat embarrassed at having worried about anything at all, considering that our entire journey was protected in inland waters.

But I don’t care what anyone says, I’m still glad I got an EPIRB! Its all about peace of mind people.

The next morning we set off, and had a perfect sail down the rest of the Pungo River. 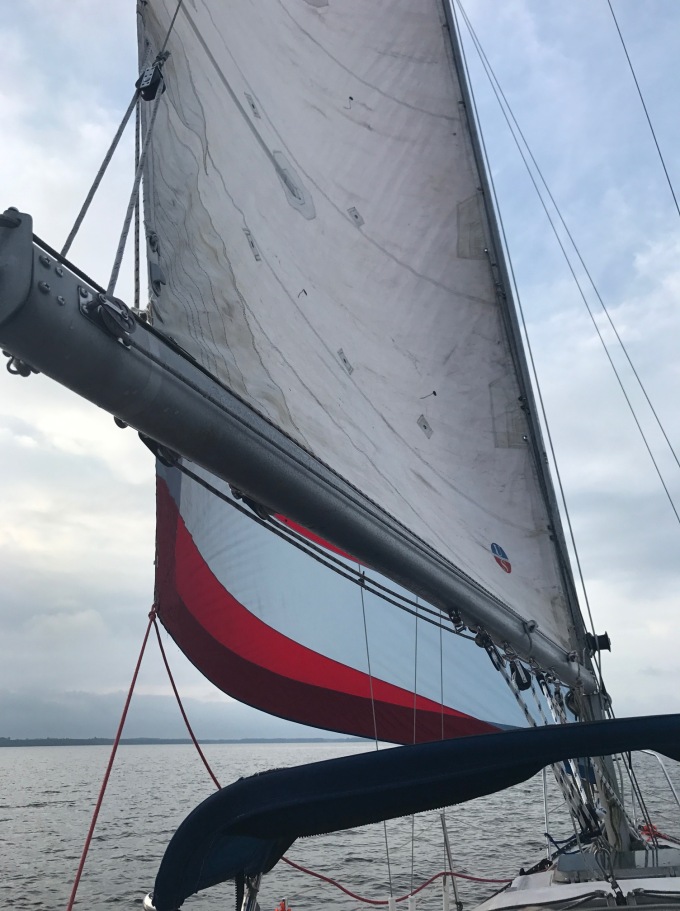 We continued the same tack down through the remainder of the Pungo River, and then across the Pamlico River and into Goose Creek. We then continued our way south along a narrow ditch, passing alongside massive shrimp docks and Coast Guard Rescue stations, and eventually opening up up into the Bay River. The Bay River feeds out to the Pamlico Sound, which we skittered alongside until we entered the Neuse River.

The water was like glass as we went down the Bay River. It looked like we were boating along the endless surface of a mirror. 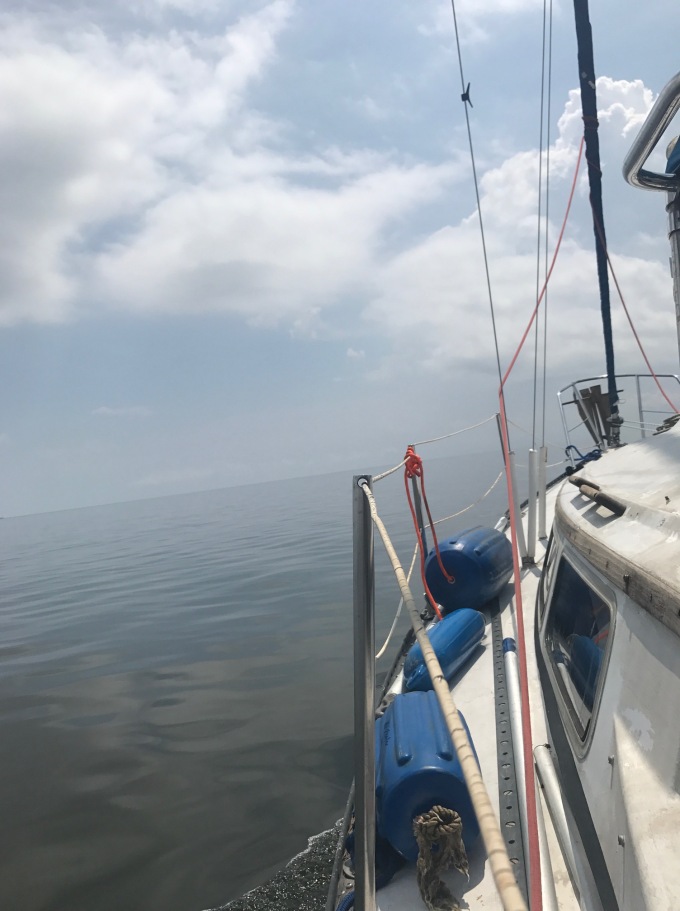 At some point I decided soup would be a good idea for lunch (it being 90 some degrees and all), after which we immediately jumped into the water to cool our sweat soaked selves. Maybe soup wasn’t the best concept for food. The dip cooled our fiery cores, and the quickly following squall cooled us off a second time.

The rain was beautiful though, and we welcomed it without respite.

I can see however, why they call it the ‘Nasty Neuse’. The Neuse River is the widest river in the country; confused seas are not uncommon and they happen with ferocious speed.

Our approach into the Oriental Channel was met with so many shrimp boats, we lost count. The area is a hot spot for the tasty crustaceans, and for all the other tasty morsels that feed on them. Fishing was definitely on our agenda in Oriental. 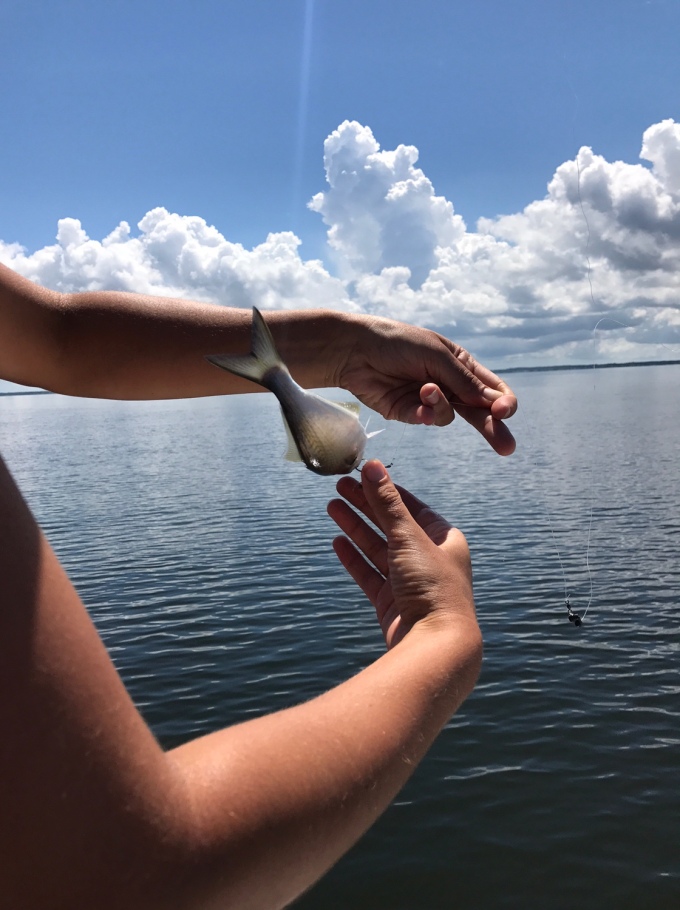 As we pulled into our slip, a boat parked alongside the dock behind us yelled “free dock!” as they pointed to their spot. Too late, we had just tied up to our not so free dock literally a few feet away. Oh well, we will enjoy the electricity and marina amenities until the morning. We will have many nights to take advantage of any cruising hospitality Oriental has to offer, since my sister is coming to visit with her kids for the next few days!

We were so excited to share our boating adventures with them, we could hardly stand it.

After tying up we were met with another visitor! A different tree frog has come aboard to be the Frog’s mascot for the night.

When my sister arrived, we wasted no time in getting those kids sea worthy. We got tiny life jackets, and fishing gear, and set off for a pleasure cruise on the Neuse River.

Edward and Sophia haven’t spent much time on the boats, but they took to it like little sailing champions.

We anchored off shore and took a much needed swim. 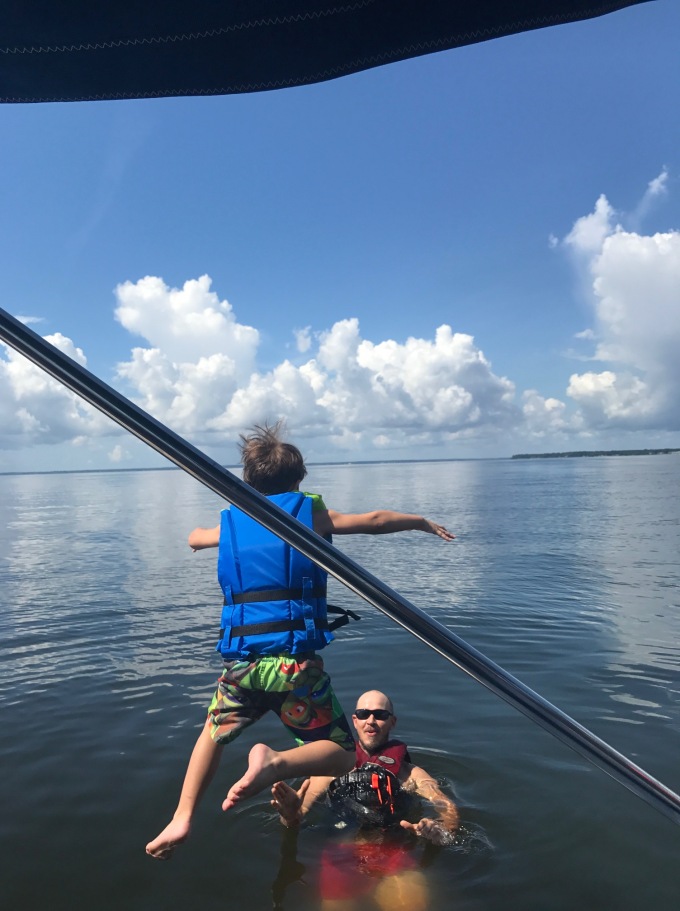 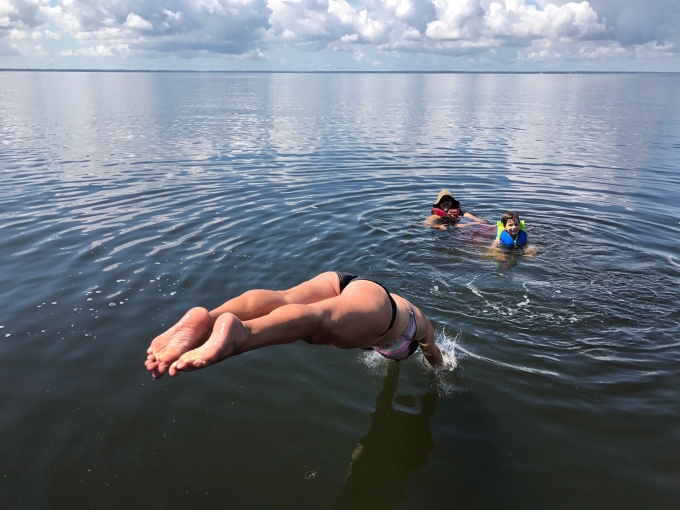 I believe this area is where northern and southern currents collide, bringing with them a variety of salt water and fresh water species. Everyone caught something… perfection.

Sophia’s face was priceless as she pulled in her first fish. 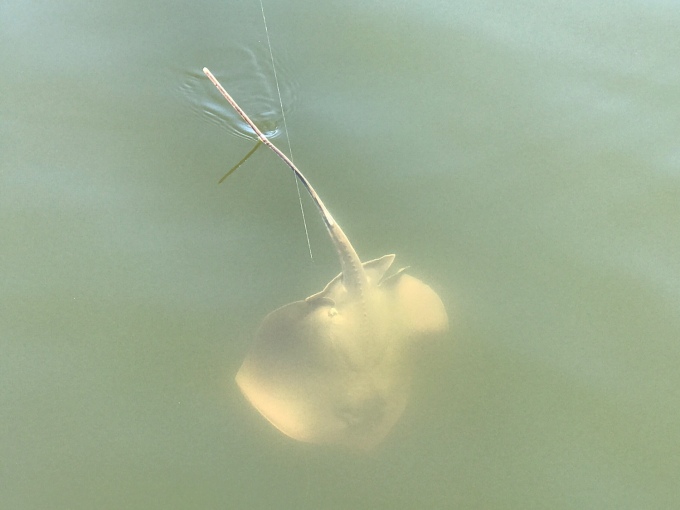 As we sailed back we all contributed our share of gratitude for such a perfect day. These are the moments that make all the trouble we go to for this boat so absolutely worth while. This ‘hole in the water’ is finally paying back!

5 thoughts on “The Nasty Neuse”