We woke up at 530 and made some eggs and coffee by the light of our amazing solar powered LUCI lights. We have a working galley with two burners on it, but we ran out of propane. So we have this back up camp stove that we are using temporarily.

The sunrise was calm and inviting as we motored out of Coles Point Marina into the Potomac.

After setting the sails we cruised along on a broad reach.

The wind was blowing from the south-southeast, pushing us along on a perfect tack towards the mouth of the Potomac into the Chesapeake Bay.

Our ultimate destination for this trip was Lewisetta Marina, on the Yecomico River just before the Potomac opens up into the Chesapeake. They had good haul out prices as well as an enticing proximity to the Bay. The Yecomico River, was less than 10 miles away from Cole’s Point, and we got an early start. It was a perfect day for sailing, and we really couldn’t end this trip without at least attempting to sail on the Bay. I called Lewisetta Marina, and they were all filled up. No space anywhere for us. Well, I guess that settles it, unless we want to go back to Cole’s Point, the Chesapeake it is! We had two options nearby: the Little Wicomico River off of the Bay only a few miles south from the Potomac, or the Great Wicomico River, about 12 miles south of the Potomac, both on the Virginia side. The Little Wicomico would be tricky, as I read in my Chesapeake Cruising Guide book that it was littered with pound nets all along the entrance. I didn’t know what pound nets were, but I decided I didn’t want to find out, so we picked the latter of our options. I made a few phone calls to some of the local marinas and found an affordable spot with plenty of room, and a haul out available the very next day at Jennings Boat Yard. That would make today’s destination 34 nautical miles from where we started at Coles Point. That would be our furthest trip yet. 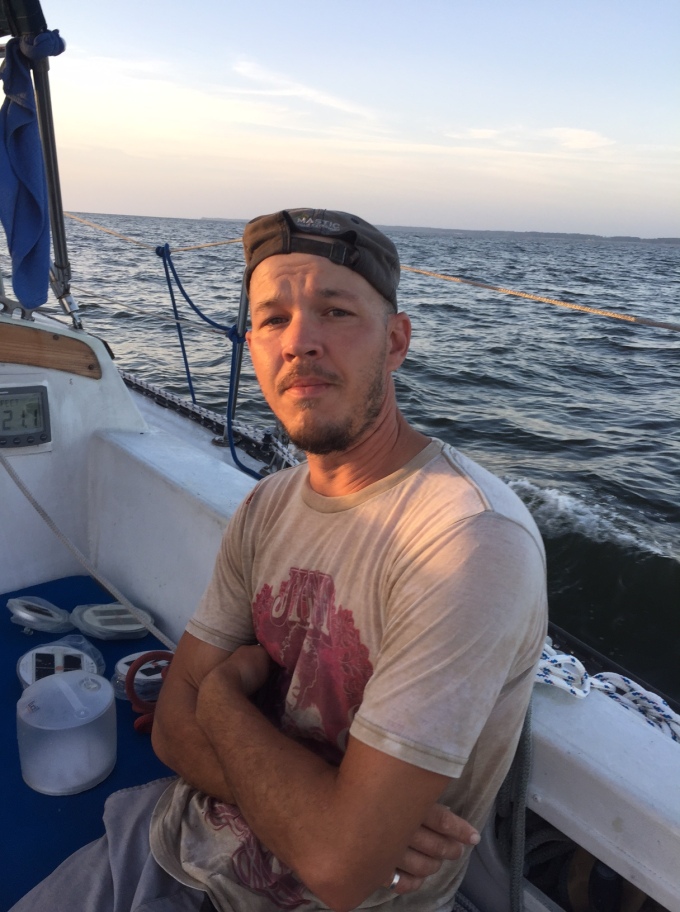 Are we even ready for the Chesapeake? 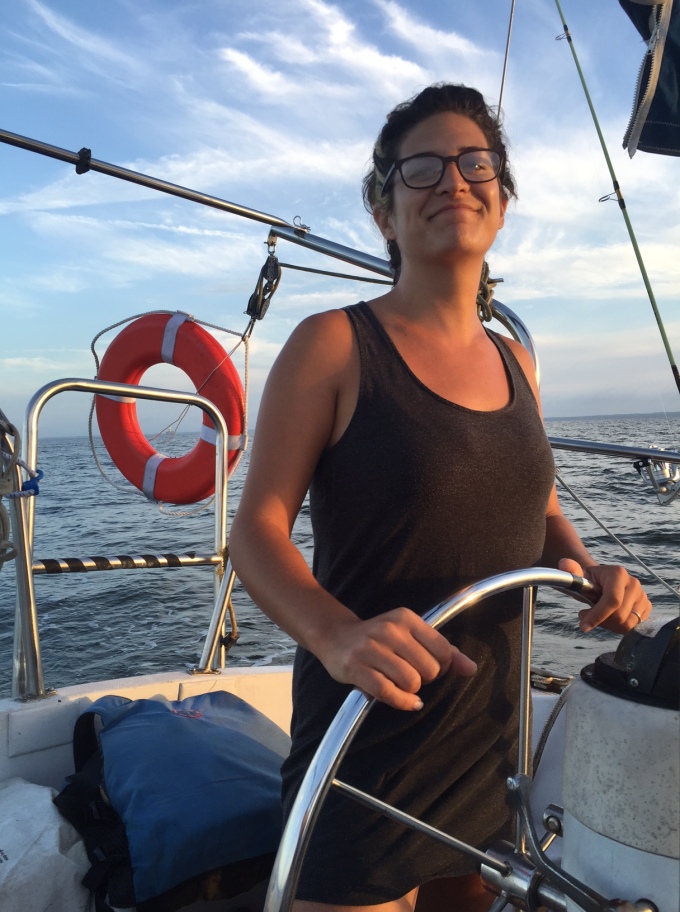 I honestly didn’t even think twice about it. I mean, the Chesapeake, how bad can it be? And its not like we are trying to sail across it, just a little scoot along the side. The sailing was so good, it was hard to imagine it going any other way. 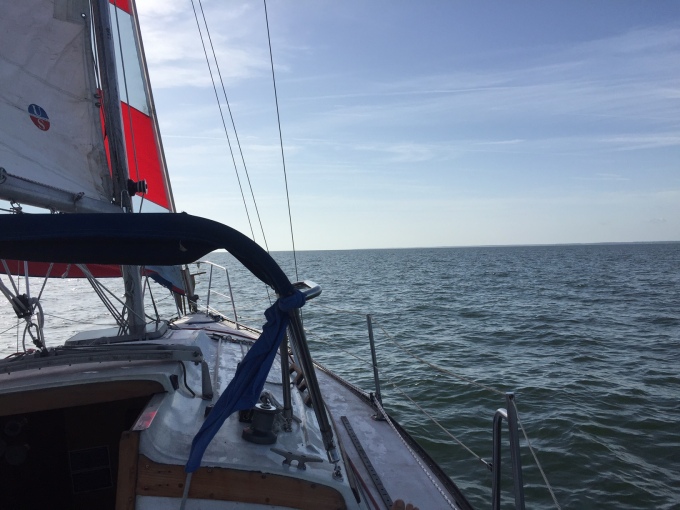 We stayed on the same tack from Cole’s Point all the way to the Chesapeake Bay for 22NM. At about 10am, we entered the Bay. And everything got really big.

We were feeling pretty proud and loving our lives at that point. The sailing was divine.

Our perfect tack all the way down the Potomac came from a southerly breeze which hit us directly in the face as we headed south on the Chesapeake. No problem, we will just have to tack around it. As the wind and waves increased, our jubilation started to take on another flavor.

The waves didn’t bother us at first, or the wind. But we soon realized that we weren’t making any progress. And shortly after realizing that, we got to feel the immense power of the tide pushing us, with the wind, onto the lee shore that was to our right. The shore we could avoid, but the POUND NETS! My God, why in the world are there a million little wooden poles sticking out of the water? Each time we came across a cluster of pound nets, it was a battle to tack in time before getting pushed right over top of them. At one point, we goofed on our tack, got stuck in irons, and came within a few yards of crashing right onto them before we could get up enough speed to tack again. Every one of our easterly tacks took us out in deeper Chesapeake waters where the waves really rocked us. It was intimidating to say the least.

We tacked again and again, making almost no progress. We were going a max of 2 or 2.5 knots with wind and water pushing against us. The wind report for the day was less than accurate, forecasting 5-10 knots, while we got blasted with 15-20. At around 2pm, we started to get pretty nervous. So, at Adams beckon, we started up the motor. ….

NO MOTOR! Of course. Of course. So, on we sailed. When we finally reached the mouth of the Wicomico, about 27 tacks later, I saw a something that almost brought me to tears. POUND NETS EVERYWHERE!! Not on the chart, and barely visible to the naked eye until you are right on top of them. I called Jennings Boat Yard and asked how the hell we are supposed to get into the river, and he replied with “you have to go into deeper water to get around them.” Adam looked through the binoculars to see that we did in fact have to go at least another mile or two further south east in order to skirt these atrocities. So, we did the one thing we didn’t want to do, we sailed east into the deep water, and ever increasing waves, and away from our destination. It was after 4… at this rate… well, lets not even go there. We just have to stay in the present moment, one impossible obstacle at a time. We stayed on this devastating tack for about 30 minutes. The weather was quickly rocking our socks off. Amidst the chaos, a little blue cushion flew off our boat into the water. We looked back and watched in horror as it moved at lightning speed with the tide and out of sight in seconds. This is not a place to fall in the water. I thought about reefing the main, but neither of us wanted to go up there and battle the waves, not after seeing how quickly we would get washed away if we went over board. Besides, the power of our sails was the only thing that could get us out of this.

After this video, the waves got so bad that Adam wouldn’t let me take any more videos or pictures. So I guess you will just have to take my word for it when I tell you that they got pretty bad. The shore was only getting farther away, and the sun was approaching the horizon.During the height of our anxiety I hailed a little red power boat to our port side. I wanted to get some information on the pound nets, and ask how far into the mouth of the river they were set. He was very close, I waved, I hailed, I waved again and hailed him again. I pointed at my radio and could see him check his, and he just waved again. Well, that settles it, there is a good chance that our VHF radio isn’t working. We had some previous suspicions, but we tested it in Occoquan and it worked fine. In the words of Captian Ron, “If it’s gonna happen, it’s gonna happen out there!” Without a radio, and unreliable cell service, there was no calling for help if one of us went over, or if something else catastrophic happened. So I called the tow-boat, again, while I still had cell service. Even if we did somehow make it to the Great Wicomico River before dark, how could we navigate the narrow channel and dock our boat without a motor? There seemed  no way around calling for a tow. I didn’t even want to think about how a tow-boat was going to manage pulling us across these waves. It would inevitably take a toll on our boat. But I have never sailed at night, and I didn’t want to start in these conditions, in the middle of the Bay.

No sight of the tow boat.. At this point we figured it would be best to tack back to shore, and just hope that we have gone far enough to clear the massive pound net obstruction. This tack started to give us real progress. Maybe the tide had shifted? I don’t know what it was but we flew. Even while getting bashed by 4 and 5 foot waves, we were going close to 7 knots, rails in the water. As we approached the mouth, we saw that we did not clear the pound nets at all. They were everywhere. But I was not about to go back out there. We searched for some clearing in the chaotic mass of sticks and were able to squeeze through a gap successfully. The Frog was flying! She really does well in heavy winds I guess. We surfed into the channel, with the wind and waves directly on our backs.

Finally, the winds died down with the land acting as a breaker. We were on a perfect run, wing on wing, headed straight up the river towards the marina. The tow boat called and said he couldn’t find us. Well, we don’t really need him now do we? But he came anyways, just as we caught site of the marina, and towed us about 100 yards into our slip at Jennings Boat Yard.

The captain of the tow boat couldn’t believe how fast we made it from the lat/long that we called him from. He said he heard there was a capsized boat on the Coast Guard channel and thought it was us. Apparently, the mouth of the Potomac can be the trickiest spot on the entire Bay. He also mentioned that the tide and wind were in the worst possible combination of directions. Local knowledge is golden, when you can get it in time.

We made it safe and sound at about 730pm, after almost 14 hours of sailing.

I am quite looking forward to a little reprieve from all the heart pounding epic boat adventures. Here is what happened to the inside of the boat while we were sailing the Chesapeake.

The marina hauled our boat out for winter the next day. The motor was running beautifully, of course. 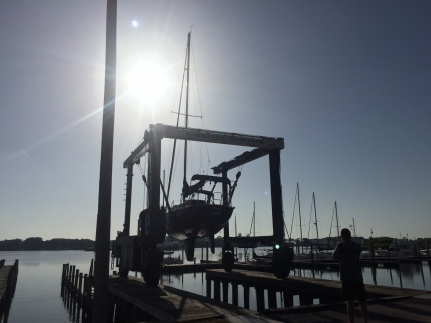 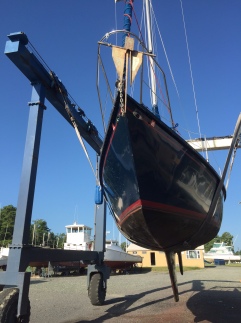 How crazy to see The Frog out of the water. We will launch her back in April or May I’m assuming. But during that time we can finally tend to some much needed repairs while The Frog is in boat purgatory.

And for our next south bounding adventure, we will be equipped with an EPIRB, an out board motor, and a working VHF radio.